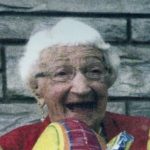 Evelyn Vera Fisher, 103, of Beaver Falls, passed away Wednesday, December 14, 2016 at Providence Care Center, Beaver Falls.
Born August 29, 1913 in Kingwood, PA, she was a daughter of the late Ross and Myrtle Guller Younkin. Evelyn lived in Beaver Falls most of her life, taking care of her family as a homemaker and mother. She worked as a waitress at the former Cut-Off Inn, Chippewa Township, and Johnny’s Restaurant, Beaver Falls. Evelyn was a faithful member of the Steffen Hill Presbyterian Church, Beaver Falls, a member of the Wenoah Chapter #3124 Order of the Eastern Star, and the Century Club.
In addition to her parents, Evelyn was preceded in death by her husband, Edward W. Fisher, November 8, 1985, and brothers, Bud and Glenn Younkin.
Evelyn will be sadly missed by her son, Paul McMIllen, Gibsonia; her daughter-in-law, Wilma McMillen, Beaver Falls; three grandsons, Eugene (Debbie)McMillen, Darlington, Greg (Lisa) McMillen, Parker, CO, and Brian (Lori) McMillen, Chippewa Township.; eight great-grandchildren, Heather, Brandon, Ryan, and Zach McMillen, Holley (John) Grodson, Shawn (Jodi) McMillen, Brittany Brown, and Chad (Coral) McMillen, and eleven great-great-grandchildren, Luke, Maddalyn, and Kylee Grodson, Collin, Ian, Keegan, and Adalyn McMillen, and Kaylee, Jordan, Daulton, and Layton Brown.
Friends will be received Sunday, December 18, 2016 from 2 pm until time of service at 5 pm, in the Noll Funeral Home, Inc., 333 Third St., Beaver. The service will be conducted by Pastor Lon Hogue of the First Church of God. A private interment will take place at Somerset Memorial Park, Somerset, PA. Online condolences may be shared at nollfuneral.com.
In lieu of flowers, memorial contributions in Evelyn’s name may be made to the St. Jude Children’s Research Hospital, 501 St. Jude Place, Memphis, TN, 38105 or a charity of your choice.
The family would like to thank the staff at Providence Care Center for the wonderful care given to Evelyn.