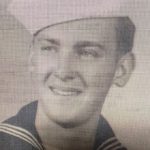 Eugene Robert (Bob) Rose of Chippewa Township went to be with his Lord and Savior Jesus Christ at 98 years of age on March 14, 2022. He prayed daily, and readily awaited to be reunited with his wife and son in Heaven.
Bob was born in Toledo, Ohio on December 14, 1923. He was the son of the late Eugene Leroy Rose and Dora Kreamer Rose. Along with his parents, he was also preceded in death by an infant brother; his son, Terry Eugene Rose in 1970; and his wife of 34 years, Alice Gregory Rose in 1978.
As a young boy in Rochester, Pa, Bob was selected by his school faculty and student peers to be awarded the American Legion Award. This award was intended to recognize a student who exemplified six qualities identified as those that define character. Those qualities being: Courage, Honor, Leadership, Patriotism, Scholarship, and Service. Bob demonstrated these qualities throughout his life. He was advanced through school early, graduating at the age of 16. He briefly attended Geneva College, then duty to country called and he enlisted in the US Navy. He served as a naval gunner in the European War Theater of the Second World War.
Bob married the true love of his life, Alice Marie Gregory, in February of 1944. They were married for 34 years and together had two sons, Terry and Lance.
Bob was ordained as a Deacon in the Presbyterian Church USA.
Bob was employed for over 42 years at Jones and Laughlin Steel Corp Aliquippa works. Most of his service was as a Unit Foreman working in the Electrolytic Tin Plate Department.
In 2013, the General Anthony Wayne Chapter of the Sons of the American Revolution recognized Bob for his service in World War II, and awarded the honor of the SAR War Service Medal.
Bob is survived by his son and daughter in law, Lance and Peggy Rose, with whom he resided the last four years of his life. He is also survived by his four granddaughters: Elizabeth, Anne (Erik Lindamood), Katherine (Evan Hall), and Rebecca (Michael Gregory) as well as a great-grandson Robert Lance Lindamood. Bob was also awaiting the birth of a great-granddaughter, Alice Eugenia Gregory.
A private funeral service for Eugene R. Rose was conducted on Friday, March 18, 2022, in the Chapel of the Sylvania Hills Memorial Park Mausoleum officiated by the Reverend Keith Black, PCUSA. The committal service included an honor guard of the Beaver County Special Unit. Interment followed alongside his wife Alice, and son Terry, a United States Army veteran, in the John F. Kennedy Memorial Garden of Sylvania Hills Memorial Park.
Professional funeral arrangements were provided by the Noll Funeral Home, Inc., 333 Third St., Beaver. Online condolences may be shared at nollfuneral.com.
The family wishes to thank the Reverend Keith Black, Mr. Timothy Finn, Esq., and Mr. Mark Noll for their kindness and generosity; as well as the many civilian doctors and nurses along with the VA medical staff and professionals who have compassionately cared for Bob these last several months of his life.