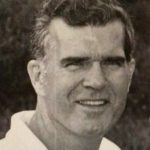 Eugene “Gene” C. Sullivan, 88, of Zelienople, formerly of Chippewa Township, Beaver Falls, PA went home to be with his Lord and Savior Jesus Christ on Thursday, September 8, 2022.
Born on February 19, 1934, in Pittsburgh, PA, Gene was the son of the late Eugene J. Sullivan and Hazel I. Sullivan. He attended Avalon High School, graduating in 1952. He then received a football scholarship to the University of Maryland. After a career ending knee injury, he transferred to Slippery Rock State Teachers College to earn a degree in Education. While there he met the love of his life Ruth whom he was married to for 63 years. He also earned a Master’s Degree from the University of North Carolina. Gene was a Biology and Chemistry teacher at Richland High School as well as being the Head Football Coach from 1964-1975. During that time, he served as an elder at Deer Creek Church and served regularly in their Christian Recreation Program. In 1976 he was hired as the Head Football Coach and Athletic Director at Geneva College. He served as Head Coach until 1992 and then as an Assistant Coach from 1993 until his retirement in 2013. He was also actively involved with The Fellowship of Christian Athletes and Athletes In Action. Gene had many accomplishments but what was most important in his life was his desire to have a positive influence on young men, consistently pointing them to Jesus. He loved his family deeply and has left an incredible legacy.

In lieu of flowers, Memorial contributions may be made in Gene’s name to the Gospel Fellowship Church Christian Recreation Program, 161 McFann Road, Valencia, PA 16059 or to the Geneva College Football Program, 3200 College Avenue, Beaver Falls, PA 15010.

The family would like to thank the staff at Lutheran Senior Life Passavant Community in Zelienople for their care.