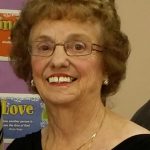 Elizabeth Jane (Edmiston) Sainovich, 87, passed away peacefully of old age in the arms of her loving daughter on February 4, 2021.

She was born March 6, 1933, in Dixonville, Ohio, to the late Clyde and Dorothy (Nelson) Edmiston. She was the middle child of five siblings and fondly referred to as “Betty Jane” most of her life.

Betty was a tomboy that grew into a teenage that loved bows and lace.

Elizabeth became the soloist at the Four Mile Presbyterian Church and sang for many weddings and funerals.

She attended Midland High School where she met her future husband, Eli Sainovich. They attended dances at the Fairview Grange and continued to date on and off during the Korean Conflict.

While Eli was in the Army, Elizabeth attended I.U.P. to become a teacher. This is where she met her college roommate and life long friend; Eugenia (Jeannie) Kalamas. Their friendship lasted for decades until Jeannie’s passing last year.

On June 23, 1956, Elizabeth was married to Eli in a beautiful lace gown. They had the first Saturday wedding at the St. George Serbian Orthodox Church in Midland, Pennsylvania with 1,000 people in attendance.

They had a wonderful life together. Eli would call her the “First Lady” of Ohioville Borough when he became mayor.

They loved attending Polka Parties, and dancing with their musician friends.

After having her children, she attended the University of Pittsburgh, where she received her Master’s Degree in Library Science.

When she began her teaching career, it was in a one room school house. Elizabeth went on to retire from the Western Beaver School after 38 years.

She was a hard worker, from driving the tractor on the farm, to canning and cooking. She was known for the beautiful cookies she baked.

Elizabeth was a dedicated daughter, sister, wife, mother, aunt, and caregiver to her mother-in-law, Nancy Sainovich. She was a loving “Baba” to her grandchildren and their spouses, Courtney Sainovich (Chris) James, and Nathan (Kristin) Sainovich.
Also, a special great aunt Betty to her grandniece, Heather Edmiston Pico.