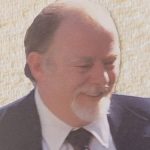 Born on April 11, 1961, to the late Jean Challis and Thomas H. Challis, Ed was a member of Our Lady of the Valley Parish, Saints Peter and Paul Roman Catholic Church, and a proud veteran of the US Air Force. Ed was employed as a driver for Lenzner/ Coach USA, and before that, he was a school bus driver for Ferguson Transportation in the Beaver Area School District and for Rhodes Transit. He also was a member of the Beaver County Ham Operator Association, KB3GLA. Ed also shared with his father a love of music, playing trumpet for his Dad’s group, the Abbey Brass.
Along with his parents, he was preceded in death by a nephew, John Challis of Freedom, and sister-in-law, Patti Challis of Beaver Falls.
Edward will be sadly missed by his girlfriend, Linda Ketterer of Brighton Twp.; his step-mother, Andrea Challis of Bridgewater; brothers, Scott Challis and his wife Gina, of Freedom, and Tom Challis of West Hollywood, CA; a sister, Leanne Challis, of Brighton Twp; a niece, Kaitlin Challis of San Diego, CA. and another niece Lexie and her husband Joshua Malovich
Friends will be received on Wednesday, November 17, 2021 from 4 p.m. until 8 p.m. in the Noll Funeral Home Inc., 333 Third Street, Beaver PA 15009. A Mass of Christian Burial will be conducted on Thursday, November 18, 2021 at 10 a.m. at Our Lady of the Valley Parish, Saints Peter and Paul Roman Catholic Church, 200 Third Street, Beaver, PA 15009. Interment will follow at Beaver Cemetery. Online condolences may be shared at www.nollfuneral.com