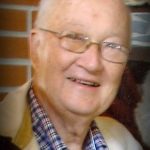 He attended Georgetown University and earned a Bachelor degree in 1951. He graduated from the University of Pennsylvania Medical School in 1955, served a three year internship in hematology, entered the US Air Force and served two years on active duty. He then served a year in a hematology fellowship in Boston.

Dr. McCreary returned to Beaver County to open a private practice in internal medicine / hematology and was later certified in nuclear medicine and went on to assume fulltime direction of the nuclear service at Heritage Valley Hospital.

His greatest loves were his family, his profession and music(especially The Chimes, an a cappella singing group at Georgetown). He was a faithful member of Saints Peter & Paul Parish.

He was preceded in death by his parents and two sisters, Nancy McClain and Suzanne McCreary Cooley.

He is survived by his beloved wife of 61 years, Patricia Black McCreary, one sibling Father Robert McCreary, OFM Cap and six children:

Friends will be received Wednesday February 22, 2017 from 2 to 4 and 6 to 8 pm in the NOLL FUNERAL HOME INC., 333 Third Street, Beaver. A Mass of Christian Burial will be Celebrated Thursday February 23, 2017 at 11:00 am at Saints Peter and Paul Roman Catholic Church, Beaver by his Pastor Father Robert Miller. Interment will follow at the Beaver Cemetery. Online condolences may be shared at nollfuneral.com

In Lieu of flowers, memorial contributions may be made in Thomas’s name to
The Villa St. Joseph of Baden, www.villastjoseph.org
Cystic Fibrosis Foundation, www.cff.org
National Association for Down Syndrome, www.nads.org