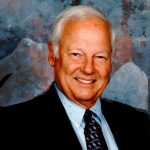 Dr. Robert Ash Gifford, 86, of Sewickley, formerly of Beaver, passed away Monday, July 17, 2017 in his home at Masonic Village of Sewickley.

Born in 1931 in Oakland, CA, he was a son of the late Homer V. and Lola Ash Gifford. Robert was a 1955 graduate of the University of Pittsburgh School of Dentistry. After serving two years as a Lieutenant in the U.S. Navy, he opened his dental office in Beaver where he practiced for 47 years.

In lieu of flowers, donations may be made in Robert’s memory to a charity of your choice.