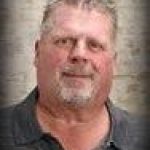 Douglas A. “Kook” McConnell, 58 of Darlington, passed away unexpectedly, Friday, July 7, 2017 at his home.
Born November 5, 1958 in New Castle, he was a son of the late Raymond and Monna McConnell and had been a resident of Chippewa and Darlington nearly all of his life. A 1977 graduate of Blackhawk High School and a 1983 graduate of Technician Training School of McKees Rocks, he had worked as an HVAC technician with Roth Brothers, Inc., of Youngstown, OH, and had previously worked at numerous companies including WCI Steel, Inc and McCarls, Inc. Doug had served formerly as secretary for 17 years with the Blackhawk Football Boosters and loved to spend his time riding his Harley Davidson. He also enjoyed bowling and golfing, having belonged to several leagues. Other than his family, especially his grandsons, Doug’s greatest passion was Pittsburgh Sports. He was an avid fan of the Steelers, Penguins and Pirates.
He is survived by his wife of nearly 25 years, Kimberly McCrea McConnell, a daughter, Tonya (Timothy) Johnson, Pittsburgh, a sister, Judi McConnell, Chippewa, his two cherished grandsons, De’Ante James and Braxton Michael Johnson, and his mother-in-law, Shirley McCrea, South Beaver Twp. Doug also leaves behind many close friends and coworkers.
Friends will be received Tuesday from 4:00 until 8:00 pm in the Noll Funeral Home, Inc., 333 Third St. Beaver. A private graveside service will be held at a later date. Online condolences may be shared at nollfuneral.com.
In lieu of flowers, memorial contributions may be made to the Beaver County Cancer Association.