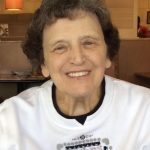 Donna Lee (Witherow) Saylor, 84, of North Sewickley Township, passed away on October 15, 2020 at her home surrounded by her loving family due to complications from Alzheimer’s disease.

She was born on July 19, 1936 in Beaver, a daughter of Eleanor (Davis) Bock and step daughter of Paul Bock. She was a 1954 graduate of Beaver Area High School and also of Garfield Business Institute.

She married the love of her life, Albert K. Saylor, Jr. in 1959 and he preceded her in death in 2008. They made a home together in Triangle, VA, where they raised two children. She worked at the Credit Union in Quantico, VA, where she worked her way up to Manager.  They moved back to Beaver County in 1990.

She was also preceded in death by her mother and step father, her sister Sally Schmidley in 1959, and her nephew, Paul Schmidley, in 2017.

She is survived by her children, Albert K. III (Kimberly) Saylor, St John’s, FL, her daughter Cynthia (Robert) Sickelsmith, North Sewickley Twp., three grandchildren, Brittany (Taylor) Stein, Pittsburgh and Katherine and Jacob Sickelsmith, North Sewickley Twp., her sister Ruth Robinson, Negley, OH, her brother and sister-in-law Kenneth and Leahan Bock, New Brighton, and numerous cousins, nieces, and nephews, and she loved each and every one of them very much.

Donations can be made to the Miracle League of Southwestern Pennsylvania, P.O. Box 1519, Cranberry Township, Pa. 16066, where her grandson, Jacob, has played baseball for 12 years.