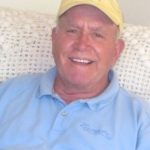 Donald Michael Kane Sr. departed this life for his heavenly home on July 28, 2017 with his daughter and grandson by his side in their home in Spring Hill, FL.
Born on May 22, 1941 in Midland, PA, he was the son of the late John and Sylvia (Bayer) Kane. Donald was a member of the Holy Family Parish and an Army Veteran during Peace Time. Don spent the first part of his career as a field technician and then moved into a successful sales position for various Heat Treating Service companies. He retired in November, 2010 following his stroke.
He is preceded in death by his beloved wife, Veronica Ross Kane (March, 2006); a son, Donald M. Kane Jr. (November, 2013); a grandson, Anthony J. Kane (May, 2017); Four brothers, John Jr, Francis, Bernard, and Ronald Kane; Two sisters, Alberta Stephenson, and Marlene Vuketich.
Donald is survived by a daughter, Lisa Kane Debo; a son; John (Tony) Kane and his wife Lisa; a daughter-in-law, Sabine Kane; six grandchildren; Jordan Kane, Ryan Kane, Susanne Gacesa, Sebastian Hunt, Jacob and Isaac Kane; two great-grandchildren; Joseph and Samantha Gacesa; a brother-in-law, Lawrence Vuketich; two sister-in-law’s, Bonnie Kane and Margaret Kane, many nieces and nephews, and a lifelong and treasured family friend Carol Natali.

Arrangements have been entrusted to the Noll Funeral Home Inc. 333 Third Street, Beaver PA 15009. A memorial service to celebrate Donald’s life will take place back in Pennsylvania at a later date and time.

“God saw you getting tired and a cure was not to be. So he put His arms around you and whispered “Come to Me”. With tearful eyes we watched you and saw you pass away . Although we loved you dearly, we could not make you stay. A golden heart stopped beating hard working hands at rest, God broke our hearts to prove to us He only takes the best.”