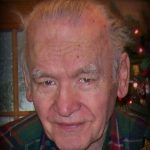 Daniel Bertovich, 90, of Garden City, NY, formerly of Industry, passed away peacefully in his sleep with his family at his side, Tuesday, May 23, 2017.
Born September 24, 1926 in Midland, he was a son of the late Paul and Barbara (Yurick) Bertovic. After serving in WWII, Daniel began a storied career as an architect, working as an architectural engineer for Creole Petroleum, Maricaibo, Venezuela and then, as an architect for the DeMatteis Organization. He left his mark on various projects in New York City such as the Museum of Modern Art, the World Trade Towers, Tribeca Tower, and the United Nations Plaza. He was a faithful member of St. Joseph’s Roman Catholic Church, Garden City, St. Bridget’s, Westbury, NY, as well as Saints Phillips and James, St. James, NY. Daniel served as a chairperson for the Nassau County Board of Elections and was a member of the Croatian Fraternal Union Lodge 0535.
In addition to his parents, Daniel was preceded in death by his beloved wife Maria in 2001 and seven brothers, Robert, Thomas, Joseph, Paul, John, Martin, and Matthew.
He will be greatly missed by his two sons, Daniel Thaddeus Bertovich, East Palestine, OH, and Christopher Mark Bertovich, Garden City, NY; a daughter, Catherine (Bertovich) Soriano; two sisters, Barbara J. Bertovic and Marilou Friscia; and cherished grandchildren, Shaun, Cody, Wes, Faith, Jonathan, Caitlin, Joseph, and Jacqueline.
Friends will be received Tuesday, May 30, 2017 from 9 a.m. until 10:30 a.m. in the Noll Funeral Home, Inc., 333 Third St., Beaver followed by a Mass of Christian Burial at 11 a.m. at Saints Peter and Paul Roman Catholic Church, Beaver. Interment will take place at Oak Grove Cemetery, Industry. Online condolences may be shared at nollfuneral.com.