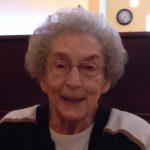 Born February 11, 1932 near Weeping Water, NE, she was a daughter of the late T. Sterling and Iccie Wright Wiles. Corrine married Roland Heil of Louisville, NE in 1955 and had their son Douglas while Roland was stationed in Germany. She attended Peru State, the University of Nebraska at Omaha, and Wesleyan University for her teacher’s certificates, teaching elementary school in Cass County and the City of Omaha for seven years. She later went on to garner her real estate sales license and sold real estate for 11 years in Omaha, NE and Elkhart, IN. Roland’s career finally brought the family to Industry where they put down roots, living in the borough since 1982. Corrine was a proud Daughter of the American Revolution.

She will be sadly missed by her beloved husband of over 62 years Roland Heil, Industry; their son, Douglas Heil and his wife, Carol Hermsen, Industry; a niece, Jacquelyn (Terry ) Gaebel, Plattsmouth, NE and two nephews, James (Jan) Richert, Fremont, NE, and Joel Richert, Omaha, NE, along with numerous great nieces and nephews.

In addition to her parents, Corrine was preceded in death by her sister and brother-in-law, Agnes Wiles Richert and Wallace Richert.

Friends will be received Wednesday, May 24, 2017 from 4 pm until 8 pm in the Noll Funeral Home, Inc., 333 Third St., Beaver. A graveside service will be conducted at Beaver Cemetery, Beaver at 11 am Thursday, May 25, 2017. Friends and family are asked to assemble at the funeral home by 10:45 am in order to process to the cemetery. Online condolences may be shared at nollfuneral.com.