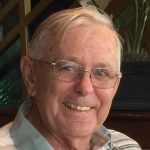 Clifford Howard (Skipper/Skip) Crain, 80, of Beaver, passed away January 26, 2021 from Alzheimer’s, with his loving family at his side.

He was born on June 28, 1940 in Pittsburgh Pa and is the youngest son of the late Mason (Spike) Crain and Naomi (Hughes) Crain. Skipper graduated from Allegheny High School in 1958 and married his high school sweetheart and loving wife Marilyn Ann (Bastl) on July 22, 1961. They shared a true love like no other. He was so spoiled by his wife and daughters he could not make his own sandwich (lol). He and Marilyn enjoyed traveling and spent many years doing so to many ends of the earth. From cruises on the Rhine, Blue Danube, Alaska and the Caribbean to all parts of Europe, Russia, England, Ireland, Canada, and many other places. They decided to retire in Fort Myers where they spent many winters and traveled back home for the summers. He was also quite the swava on the dance floor where he and Marilyn could dance like no others. During these last 5 years of this dreaded disease, Marilyn’s love and care for Cliff became stronger than ever.

He was preceded in death by his brothers Frank and Graydon (Bub) Crain.

Skipper was born into the river business as his father was part owner of Crain Brothers Inc, a very well-known Pittsburgh marine construction and towing business. But Skipper had a passion to fly airplanes and decided to attend American Flyers flight school in Ardmore, Ok. He took his wife and two kids and moved to Oklahoma where he earned his twin engine commercial pilots license and flight instructor certificate. After several years of flying charter flights and being a flight instructor, he decided it was time to go back to the roots of the river business. He was presented an opportunity to run a marine business that his brother Bub formed with Tom Campbell (C&C Marine) (Crain & Campbell) in 1968. He was promoted to President in 1973 until his departure in 1996. Under his leadership and guidance, he put C&C on the marine industry map as the premier marine repair and drydock provider in the Pittsburgh area. During those years he developed and built some of his greatest friendships and was very well respected by his peers and customers. In late 1996 he took all of his assets and sold them to River Salvage, where he finished his career in how it all started. Marine Construction, his true passion which he truly loved. Diagnosed with Alzheimer’s in 2010 he ended his river career and retired from River Salvage in 2012. In the early 90’s with the partnership of his good friend Chuck Shoben they built a 96ft. steel hull houseboat called the Obsession. They worked every night and weekend for many years to finish her thus the name Obsession. To this day she is a beauty that is seen on the Ohio River cruising around and at most home Steeler games hosting tailgate parties. His favorite hobby was scuba diving. One of his favorite diving trips of all time was a trip to Belize with his brother Frank, nephew Mark and his wife Cathleen. He could not stop talking about the true beauty and fun of diving in those clear waters. Then came the late 70’s and early 80’s that Mr. Crain (Coach as he was called) coached his daughter Bonnie and a bunch of teenage girls and led the Geminis to back-to-back championships in Cranberry Twp. Coming up short for a Three Peat in the championship game. He also was an avid supporter and follower of Seneca Valley Football and Wrestling programs where he watched his beautiful daughters on the SV Marching Band Majorette squad. Then the Pap days came, where he excelled at pappiness and loved supporting his grandkids in everything they did. Shane, Corey and Colin in Football, Wrestling and Baseball, Amanda in cheerleading and Ben in wrestling. He followed these kids through thick and thin, traveling to high school and college sporting events, to all over the world traveling with his granddaughter Amanda to Russia. Then the final chapter was the love he had and shared with his Great Grandkids. Pap as he was called by Rylee, Grayson, Maddox, Zoe and Drake. He developed a loving childlike relationship with all them and played just like a kid even at the age of 80 years old. His many names Cliff, Daddy, Clifford, Skip, Skipper and Pap will be forever loved and missed by his Loving wife of 59 years Marilyn Ann, Daughters, sons in laws, Grandkids, Great Grandkids and his many other family and friends.

There are many people we must say thank you to. First a very special dear person and good friend Pati Scavo who spent many hours, days and nights at the house helping Marilyn care for Cliff. We will always consider you as part of our family. We would like to also Thank Nancy Rhodes another personal caretaker at the house for her dedicated and loving care. The Family would like to express our true thanks and gratitude to the staffs of Elmcroft Senior Living Facility in Chippewa Twp. especially Renee and Melissa, and the staff from Gateway Hospice especially Katrina. You all are true heroes to our Family.