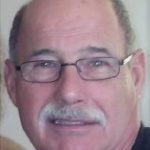 The youngest of 5 children, Ron was born March 16, 1948 in East Liverpool, Ohio to the late Kenneth and Beatrice Dingess Miller.

Ron is a graduate of Western Beaver High School, class of 1966 and The Pennsylvania State Police Academy. Ron owned and operated Miller’s Towing and Miller’s Super Service after graduating high school and was a police officer until his retirement in 1999 as a Sergeant for the Midland Police Dept.

Ron was a member of the United Methodist Church in Smith’s Ferry, PA. He was a Mason, Glasgow Lodge 485, a Shriner and a member of the Fraternal Order of Police, PA Lodge #4.

He loved hunting, fishing, Steeler football and Pirates baseball and particularly enjoyed family card games, most recently with his nieces Diana and Anita.

Always quick to laugh, he brought his sense of humor into every situation (and was perhaps the King of the Dad joke…). Generous to a fault, he would have given the shirt off his back to anyone in need, anytime and, always stoic, never a complaint, no matter how tough things might have been.

Known for his fairness and leniency as a Police Officer, a local magistrate once shared the story of telling a defendant in court “if Ron Miller actually arrested you – clearly you must be guilty”.

A brief visitation will be held Monday, November 30, 2020 from 11 a.m. until 1 p.m. in the Schwerha-Noll Funeral Home, 600 Beaver Ave., Midland. Ron will be laid to rest near his parents at Sylvania Hills Memorial Park, Rochester.  Online condolences may be shared at nollfuneral.com.

In lieu of flowers, contributions in Ron’s memory can be made at the United Methodist Church, 110 Liberty Ave., Midland, PA 15009