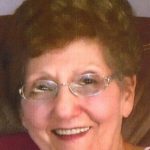 Betty Verrico passed away peacefully at her home in Brighton Township on July 2nd as she was being attended to by her nurse Alyssa, aid Jean and son David.
She was named Isabel Betty David at birth on February 6th 1931 to Syrian immigrants Anna and Isaac David. Betty along with sisters Beverly, Georgia and brother George were raised in the McDonald Heights section of Aliquippa overlooking the former J&L Steel Mill where her father worked much of his life.
Betty was a graduate of Aliquippa High School and would eventually meet and marry Patsy Joseph Verrico of Rochester. They would have 2 children, a son David and daughter Patricia Ann known as Patty.
The family lived in Van Buren Homes in Vanport until they bought a new house in Brighton Township.
Betty was an independent woman that enjoyed working much of her life. When young she was employed by National Electric in Ambridge later moving on to the Vanport facility of Westinghouse where she would retire after 27 years of service. She was a member of the IBEW.
Betty especially enjoyed her 56 years of life in the Wickham Heights neighborhood of Brighton Township where she would welcome the children into her home for candy and ice cream. She was also fond of handing out treats to the neighborhood dogs.
A frequent shopper with an outgoing personality, she would always enjoy mingling with the employees of the Shop N Save, Aldi’s and the Giant Eagle, especially the pharmacy staff.
In her later years vulnerable with dementia, she was particularly grateful for the support and care of her hospice nurse Alyssa, aides Jean, Lisa and niece Janice.
Betty was preceded in death by her husband Pat and daughter Patty.
She is survived by David M. Verrico, of Beaver, Pa; Sister, Beverly (George) Smith, of Center Twp.; Brother, George (Wilda) David, of Hopewell Twp.; and numerous nieces and nephews.
Friends will be received from 12pm until the time of Blessing Service at 4pm on Tuesday July 6, 2021, in the Noll Funeral Home Inc., 333 Third Street, Beaver PA 15009. Online condolences may be shared at www.nollfuneral.com.
Internment will take place at the Beaver Cemetery.
In lieu of flowers please donate to the Heartlandhospicefund.org