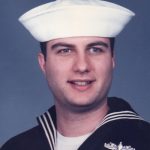 Bernard Heigl, Jr., 61, of Beaver, died Saturday, May 14, 2022, at his residence.
Born March 12, 1961, in Crafton, he was the son of the late Bernard and Elizabeth Meier Heigl Sr. He was a veteran of the United States Navy, serving for six years. Bernard started as a Nuclear Operator in 1989 at First Energy and later retired in 2015. He was a member of IBEW Local Union 712 and enjoyed hunting, being outdoors, woodworking and home projects.
He is survived by two children, Bernard Heigl, III, and Julia Heigl; two brothers, Markie and Brian (Susan) Heigl; and a sister, Judy (Mark) Spatz.
Friends will be received Wednesday, June 1, 2022 from 4-8 PM in the Noll Funeral Home, Inc., 333 Third St. Online condolences may be shared at www.nollfuneral.com. Donations can be made in honor of Bernie Heigl, Jr. to TAPS (Tragedy Assistance Program for Survivors), in addition to or in lieu of flowers or gifts.
Interment with full military rites will take place at National Cemetery of the Alleghenies on June 2, 2022 at 11 AM.