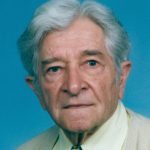 Born November 2, 1917 in Aliquippa, he was a son of the late John and Mary Trombulak.

Andrew was a proud veteran of the U.S. Army Aircorp, having served in the European Theater during WWII. He retired as a purchaser with the Michael Baker Corporation, Brighton Township in 1983, where he is credited for developing and implementing the company’s inventory procedure during his 42- year career. In his spare time, Andrew loved to work with wood, especially creating bird houses and toast tongs. With his carpentry skills well known, he helped build several houses in the area. He was also a member of the GCU.

In addition to his parents, Andrew was preceded in death by his beloved wife, Jeannette Burrows Trombulak in 2013; his son, Kevin Michael Trombulak in 2012; two brothers, Ted and Emil; and three sisters, Mary, Helen, and Elizabeth.

Friends will be received Sunday, July 9, 2017 from 4 p.m. until 6 p.m. in the Noll Funeral Home, Inc., 333 Third St., Beaver, where a Blessing Service will be conducted Monday, July 10, 2017 at 11 a.m. Full Military Honors will be given by the Beaver County Special Unit. Private interment will take place at Beaver Cemetery, Beaver. Online condolences may be shared at nollfuneral.com.

The family would like to thank Lifecare of Beaver County and Good Samaritan Hospice for the loving and compassionate care given Andrew.