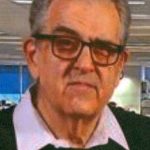 Andrew James “Andy” Nuzzo, 76 of Industry passed away Friday, November 10, 2017 at Brighton Rehab, Brighton Twp. with his wife at his side.
Born September 14, 1941 in East Liverpool, OH, he was a son of the late Nick and Rose Dante Nuzzo. Andy was a well-known and respected sports columnist for the Beaver County Times for 33 years, where he covered Beaver County High School Sports, Pittsburgh Pirates, Pittsburgh Penguins and Pitt Football. He was a 1959 graduate of Midland High School, had attended the University of Toledo and Geneva College and in 2016, he was inducted into the Beaver County Sports Hall of Fame. Andy was also a faithful member of the St. Blaise Parish family, Midland.
He will be sadly missed by his wife, Mary Margaret “Peggy” Brooks Nuzzo, a step-son, Kevin J.P. (Erica Arnold) Wetzel, San Diego, CA, a step daughter, Maya C. Wetzel, Amsterdam, Netherlands, a sister, Florence Selvin, Philadelphia, and a granddaughter, Claire Arnold-Wetzel. He also is survived by numerous aunts, uncles, and cousins, as well as many former colleagues, and friends.
Preceding him in death besides his parents was a brother, John and a brother-in-law, Rick Selvin.
Friends will be received Monday from 2-4 and 6-8 in the Noll Funeral Home, Inc., 333 Third St., Beaver. A Mass of Christian Burial will be celebrated Tuesday at 10:30 am at the St. Blaise Church by his Pastor, Father Michael Yaksick. Entombment will take place at the Beaver Cemetery Mausoleum. Online condolences may be shared at nollfuneral.com.