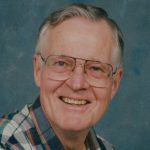 Born April 17, 1927 in Saukville, Wisconsin, he was the son of the late William and Viola Laubach Fellenz and had been a resident of Brighton Township since 1972. James began his career in aviation in 1953 with TWA, moving onto Mohawk, Allegheny, and US Airways, where he retired in 1989 as an aircraft dispatcher. He was a veteran of the US Army Air Corp, having served during WWII and was a member of the Saints Peter and Paul Roman Catholic Parish in Beaver.

Beside his parents, James was preceded in death by his first wife, Phyllis D. Jones Fellenz in July of 2000 and his second wife, Dolores Leahy-Fellenz in June, 2011, along with 1 brother, Frank Fellenz, 1 sister, Barbara Brunett, and 1 step-son.

Friends will be received Thursday from 2:00 pm until 4:00 pm and 6:00 pm until 8:00 pm in the Noll Funeral Home, Inc., 333 Third Street, Beaver. A Mass of Christian Burial will be conducted Friday, September 11, 2015 at 10:30 am by Fr. William Schwartz at Saints Peter and Paul Roman Catholic Church, 200 East End Avenue, Beaver, Pa 15009. A private entombment will take place at Sylvania Hills Memorial Park. Online condolences may be shared at nollfuneral.com.